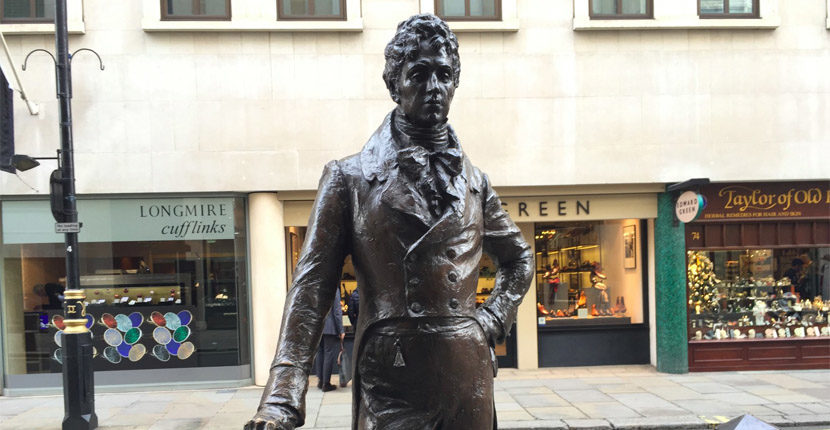 George Bryan Brummell, better known as “Beau” Brummell, was born in 1778 in London. His middle class family raised him to be a gentleman and the young Brummell attended Eton followed by a year in Oxford, where he left his mark both with his wit and his sartorial skills.

At the age of 16, he joined the personal regiment of George, Prince of Wales who was later to become Prince Regent and eventually King George IV. Most of the other officers were heirs to titles and fortunes but Brummell struggled to afford the regiment’s elaborate uniforms and expensive social activities. However, his charming personality drew the attention of powerful aristocrats and he found himself quickly progressing through the ranks and becoming captain. Enamoured of the London social scene, Beau Brummell resigned his commission and dedicated himself to the pursuit of pleasure and style.

The young man, by now a close friend of the Prince, was meeting all the right people and moving in all the right circles. Some might argue that he was a celebrity of the Regency Era, charming everyone with his words and looks but somewhat lacking in substance. Regardless, his contribution to fashion is undeniable: his usual attire consisted of a fitted dark coat, starched white linen shirt and full-length trousers, which were quite an innovation for high society which up until then favoured knee breeches and stockings. Many consider Brummell’s combination the precursor of the modern suit.

Brummell didn’t just influence the clothes men preferred. He was a big fan of personal hygiene, which was a novelty at the time, and he bathed, shaved and brushed his teeth regularly. Rather than wearing a wig, he exposed and styled his hair and he avoided excessive and unnecessary accessories, which was just what aristocrats needed as the fate of their French counterparts was never far from their minds. The noble gentlemen that he surrounded himself with were enchanted and couldn’t get enough of his advice. His impeccable style, manners and conversation made him the ultimate fashion icon and the model dandy.

Unfortunately, Brummell’s final years were not as happy as one would have expected. The Prince gradually distanced himself and the ultimate blow to their relationship came when, during a party, the Prince ignored Brummell who reacted by calling him fat! But Brummell’s ultimate downfall was his debts. His powerful friends helped him flee to France and avoid debtors’ prison and they even secured him a consular appointment in Caen, which unfortunately only lasted 2 years. He died penniless and with symptoms of insanity in an asylum in Caen in 1840.

Despite the unfortunate events surrounding his later life, Beau Brummell’s legend transcends time. His lasting influence on men’s suits was immortalised in a statue which can still be seen in London’s Jermyn Street. Brummell’s passion for beauty and style is what also drives our brand to create luxury 3 piece suits for the modern gentleman. Browse our collection and join our newsletter for regular updates on fashion and etiquette. 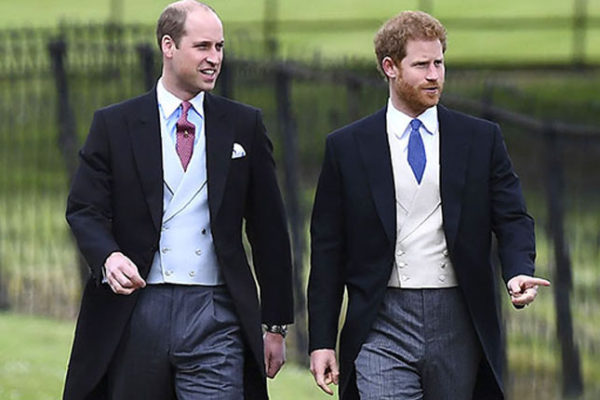 The Elite of Suits for the Modern Gentleman